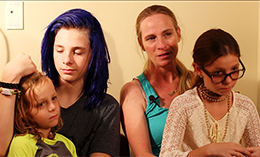 Shannon Yaremchak and three of her children

Shannon Yaremchak has a message for lawmakers considering budget cuts to federal safety net programs like SNAP: “…it’s important to keep in mind the people that are impacted. Even though food pantries can provide emergency food assistance, that [won’t] sustain a family.”

Shannon is a mother of four children, and was a teacher with eight years of professional experience. However, an unexpected financial setback began a series of troubling events that would radically alter their lives. Not long after her youngest son was born in 2005, her husband lost his job and was forced to return to their previous home in Kentucky to search for work. Shannon soon found herself to be a single mother not receiving financial support from her now estranged husband.

“I had nobody to watch the baby… I couldn’t work,” she explains. “Eventually, the landlord had to take us to court for nonpayment of rent.”

By 2007, the Commonwealth placed Shannon and her children in a single motel room with two beds to escape homelessness. She was unemployed, she had no car, and was a long way from the nearest supermarket. To avoid hunger, she fed her family processed food purchased from the nearby gas station.

“If you can microwave it, that’s what we ate. We developed some really unhealthy eating habits,” she recalls.

Shannon applied for SNAP benefits through the Massachusetts Department of Transitional Assistance (DTA). Initially, she was denied since her husband had found work. But when it became apparent that he wasn’t helping financially, DTA approved her for assistance.

Daily living in the small motel was extremely difficult. Although Shannon could buy groceries with her SNAP benefits, there was little space in their mini fridge to store them. Also, the monthly benefits weren’t always enough. When they ran out, she relied on Lorraine’s Soup Kitchen and Pantry in Chicopee — a member agency of The Food Bank — to feed her family. She also received support from other parents at the motel.

They eventually moved to a private three-bedroom shelter apartment in Springfield to gain more living space. But with that move came a number of other problems for the family. The neighborhood crime rate was very high, her older kids were making a long commute to school in Agawam, and she was still in need of a job.

Shannon’s saving grace came when she connected with the Corporation for Public Management’s Secure Jobs, a program that helps people in supportive housing to find work. The organization hired her as a teacher in their Young Parents Program. She soon received a rent voucher and secured an apartment.

“I’m proud to say that I don’t have [the voucher] anymore. I no longer need it.”

Shannon is currently working on a master’s degree in nonprofit management and philanthropy. Her goal is to start an organization to support families experiencing the same food insecurity and homelessness that she faced.

Budget cuts to emergency assistance programs, such as SNAP, would eliminate opportunities for Shannon and others facing difficult times to stabilize their families, get back on their feet and become productive and successful contributors to the community.

“This is a moment in our lives,” explains Shannon. “Being homeless doesn’t define who we are.