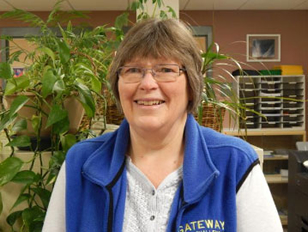 I had the pleasure of meeting a local hero the other day. I visited Wendy McCaul, Food Services Director at the Gateway Regional School District in Huntington. She’s been the director since 2001 and has worked there for the last 30 years. The School Nutrition Association of Massachusetts recently presented her with the “Food Service Director of the Year” award. This statewide achievement recognizes the extraordinary contributions of school nutrition directors who manage effective, fiscally sound school meal programs that provide healthy, appetizing meals to students.

“I took a job as a dishwasher in the Gateway Cafeteria 30 years ago while I was raising my kids and I’ve been here ever since,” explained Wendy. “My kids went to school here. I now have grandchildren who go to school here. I live a few minutes away. I love my job and my community.”

Unlike many other schools across the country, Gateway bucks the trend by running its cafeteria in-house, rather than outsourcing it to a for-profit food service vendor. Gateway Regional houses both the middle and high schools for seven rural hill towns, ranging in population from 521 to 2,180 residents (2010 U.S. Census).*

A very growing problem that looms in these hill towns is the presence of food insecurity. With a population of 8,893 people, approximately 751 individuals receive SNAP benefits (formerly food stamps). While not as concentrated and large as is urban centers, it’s still very real and serious for one out of about every 13 people in this seven-town school district.

Wendy explained that she’s seen food insecurity increase dramatically in the last 14 years at Gateway. In 2001, 24% of children were eligible for free and reduced meals based on household income. Last year, that percentage reached 34%. She sees hungry kids all the time.

Wendy and her team serve food to 600 children every day — 600 lunches and 90 breakfasts. Much like other schools, fewer children eat breakfast than lunch. There are many reasons for this, including the fact that buses often don’t arrive until after breakfast is over.

Wendy has a plan: “I’m trying to make breakfast more accessible for kids, especially the ones who don’t have enough food at home. This year, I’m hoping to start a grab and go breakfast in the hallways.”

She shared with me a story about a family that moved to the school district. Wendy’s daughter-in-law, an elementary school teacher, noticed the family’s two children in her classroom the very first day. Their clothes looked tattered so she asked them if they had lunch. The only food they had was Cheetos. She sent them to the cafeteria. Wendy and her staff learned that these kids were income-eligible for the free and reduced school meals program and made sure they were enrolled in it. They are very proactive about doing this because they understand that children need to be nourished in order to be attentive and learn in school.

Fortunately, Wendy is noticing changes in children’s and parents’ habits toward healthier eating. Many years ago — long before last year’s new federal school nutrition guidelines went into effect — she began shifting the school menu to include more nutritious ingredients, such as whole wheat. The new federal guidelines will also require reducing the high level of sodium in school meals beginning next year. Wendy is up for the task because she wants kids to eat healthy food. She knows how much some households rely on school meals for their kids.