Since 2010, the annual fundraising event has provided more than 2.5 million meals

In 2010, 93.9 The River’s Monte Belmonte decided to create Monte’s March — a day-long walk across the Pioneer Valley — to raise awareness of food insecurity in our community, and funds for The Food Bank of Western Massachusetts. Monte broadcast live, encouraging listeners to call with their donations. Since that first March, the event has continued to grow in size, length of days, and funds raised. 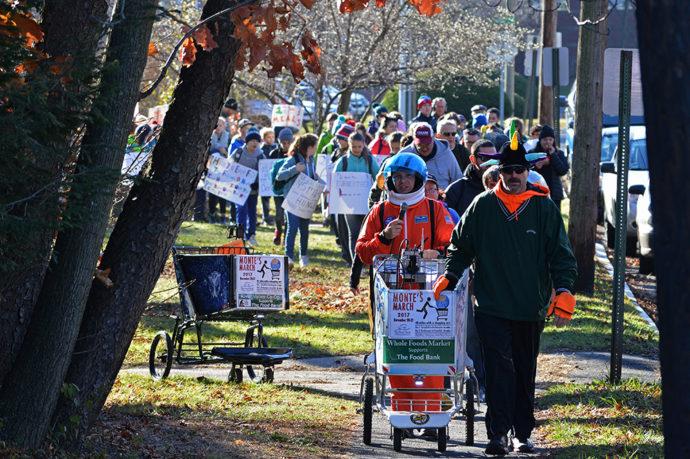 On November 20 & 21, 2017, Monte once again led his group of community supporters, political representatives, and business leaders along the streets of the Pioneer Valley for the eighth consecutive year. This year, The March kicked-off from Martin Luther King Jr. Community Center in Springfield on Monday morning, and concluded at Magpie Woodfired Pizzeria on Bank Row in Greenfield on Tuesday evening.

When Monte and his entourage finally reached Greenfield, a running total of more than $236,000 was announced. However, during the following two weeks after the march, donations continued to come in, bringing the final total to $258,037. Since 2010, the event has raised $883,000 allowing The Food Bank to provide more than 2.6 million meals to our neighbors in need throughout Berkshire, Franklin, Hampden and Hampshire counties.

“Physically, the miles made me feel a little tight,” explained Monte. “But it’s all worthwhile if we can make a difference for The Food Bank of Western Massachusetts. And I think we really have.”

“The support we saw from everyone, in every town, over these two days has been absolutely amazing,” explains Andrew Morehouse, Executive Director of The Food Bank, who also joined Belmonte for all 43 miles of The March. “It is truly inspiring to see everyone come together to help their neighbors in need and strengthen our community.”

“It’s about helping people,” said McGovern. “This is not a political speech or a press conference. This is like-minded people coming together and making sure people in our community don’t go hungry.”