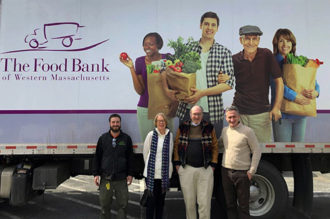 When asked about the countless times his old truck had broken down in the past two years, Tom Leporati, driver at The Food Bank, doesn’t hesitate to recall the specifics.

“The truck had plenty of problems,” he says. “My lift gate would sag, no matter what I put on it. I had a day in Lenox where the hydraulic lines on the gate blew and had to wait around two hours for somebody to come and fix that.”

Leporati’s concerns about the truck weren’t self-centered. His route covers deliveries for Brown Bag: Food for Elders sites in all four counties of western Massachusetts. When his truck was out of commission, it sometimes meant that food-insecure seniors relying on a free bag of groceries each month as a supplement had to wait for distribution events to be rescheduled. For individuals with limited access to transportation and healthy food, postponements like these can lead to an inadequate supply of nutritious food.

So last year, when John and Jerry Soechting of Great Barrington approached The Food Bank, asking how a charitable donation could help get more food out to the region, Andrew Morehouse, executive director, brought up the need to replace the old truck.

“They wanted to make an investment in something that would have a lasting impact.  We discussed several options and they settled on the truck,” Morehouse says.

The Soechtings moved to the area a couple of years ago. They have a history of giving to food banks in other parts of the country and wanted to continue this kind of support in western Massachusetts. This particular donation was made in honor of John’s late mother, Elisabeth Soechting, who had a strong commitment to charitable giving and organic farming.

“She would be thrilled to know that she contributed to the acquisition of a truck to distribute food to the elderly,” the Soechtings stated.

With this generous donation in hand, and additional support from the Beveridge Foundation, The Food Bank purchased a replacement truck in 2018. In March, John and Jerry greeted Tom and the truck at the Brown Bag distribution site in Great Barrington.

“I’m very grateful,” Leporati says. “It’s the most efficient of all of our trucks and effective for what we need.”

During its first month in operation, the new truck clocked in 1,582 miles while delivering the equivalent of 334,911 healthy meals. More than half of that total was distributed at Brown Bag sites throughout the region.