The Ford Motor Company Fund, the charitable arm of Ford Motor Company, is expanding its commitment in the fight to end hunger in America by donating to Feeding America member food banks. In an effort to help deliver more meals to the more than 211,000 people facing hunger in Western Massachusetts, we are happy to announce that they have provided The Food Bank of Western Massachusetts a $28,500 grant. We were one of several New England area food banks to receive this award. 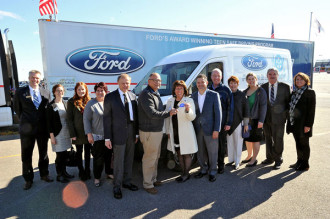 The grant will allow us distribute even more healthy food to our 230 member agencies, as well as through our direct-to-client feeding programs (including our Mobile Food Bank, and Brown Bag: Food for Elders). Last year, The Food Bank distributed nearly 10 million pounds of food.

“We are thankful to The Ford Motor Company Fund for its support,” says Andrew Morehouse, Executive Director at The Food Bank. “For our neighbors who may not know where they’ll find their next meal, we strive to be the resource they can depend on.”

“Each year, 48 million Americans – including more than 15 million children – struggle with hunger,” says Jim Vella, president of Ford Motor Company Fund and Community Services. “Assisting communities in times of need is core to our mission, and we are proud to team up with The Food Bank of Western Massachusetts in the fight against hunger.”