On Friday, June 10, The Food Bank of Western Massachusetts honored the 5th grade students of White Street Elementary School for winning the 3rd Annual Springfield Souper Bowl. This is the second consecutive year that White Street has won the food drive competition.

Throughout the week of January 25 – February 1, 2016, White Street students collected 5.4 lbs. per student (2,003 pounds total) of non-perishable food items. To encourage students to donate, the kids made a special video which they put on the schools web site. They also offered special incentives for donations, such as a free homework pass for the week for every 15 cans of food donated.

The award ceremony took place at Forest Park in Springfield, where The Food Bank hosted a special field day for the young students. They played organized activities including kickball, relay races and a number of water games. 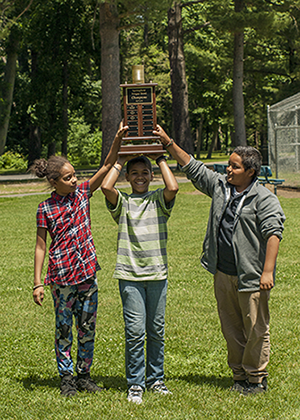 View all photos from field day

The Springfield Souper Bowl began in 2014, and was created by The Food Bank in partnership with the Springfield Public School System. It is a competition for 5th grade students at various Springfield elementary schools to collect the most pounds of food per student.

It is more than a typical food drive, as it is designed to motivate students to make a difference in the lives of those around them and become active members in their communities. In addition, it demonstrates to students the value of volunteering and the power that working together can have.

Overall, 15 schools participated in the Souper Bowl, collecting a record 11,963 lbs of food to benefit The Food Bank of Western Massachusetts and their Springfield-area partner food pantries. That will provide more than 35,880 meals to their neighbors in need.