SNAP cuts will have debilitating effects on 100,000+ western Massachusetts residents 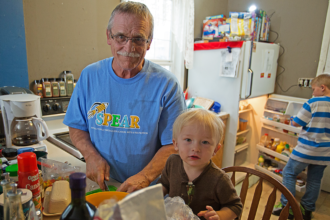 SNAP is the largest domestic hunger program in the country, providing nutrition assistance to millions of eligible individuals and families. Here in western Massachusetts, SNAP benefits help keep more than 100,000 seniors, veterans, children, working families and others from the debilitating effects of hunger.

Now that Congress has returned from its August recess, members will resume deliberations surrounding the fiscal year 2018 budget. Many of these discussions will focus on deep cuts to safety net programs that protect our most vulnerable citizens. The Supplemental Nutrition Assistance Program (SNAP) is one of these important programs on the chopping block.

In July, the House Budget Committee passed a budget resolution that calls for $4.4 trillion in cuts over the next decade, including at least $203 billion in domestic spending. The resolution instructs the Agriculture Committee to cut at least $10 billion over 10 years. Reports are that these cuts will likely be directed at SNAP, with an additional $150 billion in suggested cuts coming from dramatic downsizing and restructuring of the program.

Many argue that the effects of these cuts could be mitigated by the work of private charities like The Food Bank of Western Massachusetts. However, SNAP provides many millions more meals each year than do all the food banks in the country. If those meals were to be cut, the private sector would be unable to fill the enormous gap that would remain.

Here in western Massachusetts, SNAP benefits help keep more than 100,000 seniors, veterans, children, working families and others from the debilitating effects of hunger. They are our friends, our neighbors, our family members, our co-workers and our fellow parishioners. They are the people working the checkout counter at our local grocery stores. They are the people driving our children’s school buses. They are the people providing home healthcare for our elderly parents.

It is our duty to work together to feed our neighbors in need and lead the community to end hunger. We are thankful to have the support of local mayors that have taken action to protect SNAP. Recently, many mayors contacted our Congressman and Senators, urging them to do the same.

As our federal government once again begins to debate the merits and necessity of these critical programs, we ask you to join us in making your voice heard. We strongly urge you to reach out to your U.S. Representatives and Senators to oppose the House budget resolution that would decimate SNAP and other programs aimed at eliminating hunger in our great and prosperous country. The federal budget should not be balanced by forcing hungry people to go without food.