Reconnecting on the Road to End Hunger 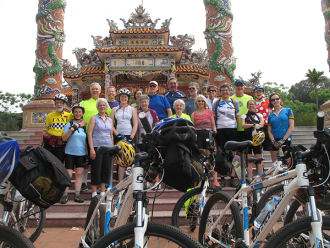 John (fifth from left, back row) and Betsy (seventh from left, front row) with their cycling group in Vietnam

Since the first Will Bike 4 Food event in 2011, close to 500 cyclists have pedaled towards ending hunger in Western Massachusetts. However, one rider – John Follet of Chesterfield – claims a very unique distinction. He is the only person to ride in all four WB4F events. His participation alone has made a real difference in the lives of our food insecure neighbors, providing close to 8,000 meals. Riding has made a difference in John’s own life, as well. Will Bike 4 Food offered the opportunity to not only rekindle an old friendship but also led to a cycling tour to remember on the other side of the globe.

John was drawn to WB4F because it was a fun way to support a cause he felt passionately about. As a 70-year-old lifelong cyclist he no longer yearns for a competitive atmosphere. He has ridden long tours, raced in competitions and even commuted by bike before he retired.

“I’m retired now. But I was a pediatric physician and I had patients who skipped meals,” explains John. “I know how important access to nutritious food is. I think food is an essential right.”

John knew that his involvement would help impact the lives of others in the community, what he didn’t know was that it would bring him back together with an old friend. While fundraising for his second WB4F in 2012, he recognized one of the names on the list of riders:  Betsy Evans. The two had become friends while their children were in school together in Western Massachusetts in the ‘70s. They lost touch when John and his family moved to Wisconsin, only to return to Massachusetts many years later. John reached out to Betsy and they made plans to ride the 50 mile route together at WB4F.

“It was really a special thing to have a long ride where you have hours together,” says Betsy. “You’re really hearing about each other’s lives and reflecting on them.” The two discussed what their children and grandchildren were up to and laughed about memories they shared years ago while riding past beautiful farmland and rolling hills.

“I love that route,” says Betsy. “I’ve lived in the area for almost 40 years and I go back to that route.”

As the two rode they were able to make new connections as well. John cites meeting other riders as one of his favorite parts of cycling. So when he spotted a young rider with a flat tire he took the opportunity to help. As John changed the tire he chatted with the rider and her friend. By the time they hit the road again, you would have thought he and the riders were best friends, says Betsy.

One of the many conversations John and Betsy began on that ride that they kept coming back to was how great cycling was as a vehicle to see the world. Betsy mentioned she had been thinking about planning a cycling trip abroad, and John shared that he had wanted to see Vietnam for years. Excited by the time they had spent together at Will Bike 4 Food, they gathered a group of family and friends and planned a cycling tour through Vietnam which Betsy describes as a life-changing experience.

Choosing to travel with a bicycle tour company, they rode with a tour guide allowing them to focus on the sights and local culture. The group rode around 150 miles in short sections, starting in the north in Hanoi and heading south towards the Mekong Delta. Every day there was new scenery to take in from vast rice fields to bustling open air markets to communal gardens farmed by locals to provide food to their villages. Just like at home, John enjoyed being able to stop and chat and found all of the locals to be friendly and welcoming.

“That ride at Will Bike 4 Food planted a seed of camaraderie that kept growing and growing,” says Betsy. “I don’t think our trip to Vietnam would have ever happened without that ride.”

John is now gearing up for his 5th Will Bike 4 Food and Betsy will be riding alongside him. Together they will enjoy the positive atmosphere and scenic views, and perhaps most importantly make new friends in the cycling community while giving back to the larger Western Mass. community.

“The connections keep multiplying,” says Betsy. “It’s like throwing a stone into a pond.”

Learn more about Will Bike 4 Food, and how you can get involved.