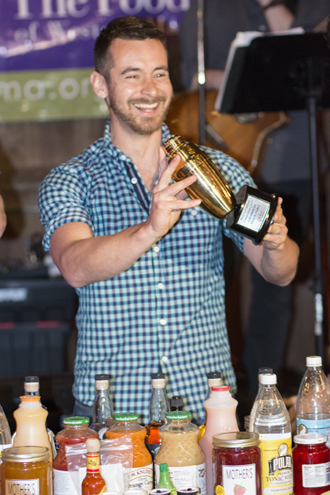 See photos from the Farm to Cocktail event

On the evening of May 4, a sold-out crowd filled the event barn at Quonquont Farm in Whately for The Food Bank’s Farm to Cocktail Competition. This fundraising event challenged eight local bartending teams from around the region to mix their most creative cocktails using locally-sourced ingredients.

At the end of the night, it was Jesse Egan Poirier, of Public Eat + Drink in North Adams, who was crowned the Farm to Cocktail champion.

The competing bartenders chose from a variety of spirits (from Berkshire Mountain Distillers) and locally-sourced ingredients to craft a signature cocktail. Event guests sampled the cocktail creations and voted for their favorite. The top two vote-getters, Lattitude (People’s Choice winner) and Public Eat + Drink, advanced to the next round of the competition, where they had two minutes to craft a new cocktail using a special mystery ingredient—sriracha hot sauce. A special panel of judges sampled the mystery cocktails and determined the champion. The panel included Mary Reilly (Publisher of Edible Pioneer Valley and the Executive Chef of Westfield State University’s Dining Services program), Michael Sharry (Event Planning & Farm Manager Berkshire Mountain Distillers), and Nunzio Bruno (Professional Development Chair of Northampton Area Young Professionals and Management Consultant and Business Strategist at the Disruptive Strategy Co.).

The Food Bank was proud to partner with Western Massachusetts farms in order to provide locally-sourced ingredients for the competing bartenders to use in their drinks. We continue to develop strong partnerships with local farms. Of the total 10 million pounds of food distributed last fiscal year, one million pounds of it was grown right here in the Pioneer Valley by 28 local farmers. This food was immediately distributed to children, seniors, veterans, working families, and others throughout the region.

The Farm to Cocktail competition was made possible by numerous sponsors, including gold sponsors Pioneer Cold and Stop & Shop. The event was hosted by John O’Brien from media sponsor Rock 102. All spirits for the event were donated by Berkshire Mountain Distillers.