On May 24, The Food Bank of Western Massachusetts’ Executive Director, Andrew Morehouse, was awarded the Carlos Vega Community Champion Award by the Latino Scholarship Fund of Holyoke. The award is bestowed annually to local residents for their leadership and service to the community.

Carlos Vega immigrated to Holyoke from Ecuador as a child, and was a champion of the Latino community. He helped create, worked with, and served on the boards of several progressive local organizations. Carlos dedicated his life to social justice and worked tirelessly to benefit the city of Holyoke. 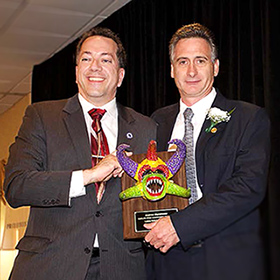 Morehouse, who collaborated frequently with Carlos while working in Holyoke, was honored to receive this prestigious award. “I will always remember Carlos for his commitment to social justice,” explains Morehouse. “I am so very pleased to see his legacy live on in his son, Rep. Aaron Vega and many others, including me, whose lives he influenced.”

Prior to becoming The Food Bank’s Executive Director in 2005, Morehouse directed Solutions Community Development Corporation in Holyoke, which he founded in 1995. In that capacity, he devoted a decade to assisting Latinos and others in Holyoke to acquire job skills and supportive services to gain employment, and save money to go to college, buy a home or start a small business.