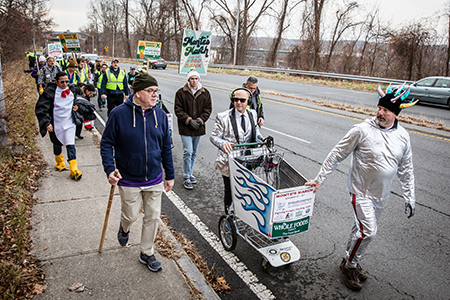 In late November, Monte’s March X — the two-day, 43-mile, march from Springfield to Greenfield — cleared two milestones in a major effort to raise awareness about, and provide healthy meals to, households facing hunger in western Massachusetts. The fundraising event to benefit The Food Bank marked its 10th anniversary and raised an unprecedented ( )$368,000* during the two-day march. The total donations will provide the equivalent of more than one million meals. With contributions still coming in, the final fundraising tally is expected to rise. Monte’s March X was founded and is led by Monte Belmonte, radio personality at WRSI – 93.9 The River in partnership with The Food Bank.

“A ridiculous publicity stunt indeed,” Belmonte stated while broadcasting live during the March. “But it gets us to pay attention to a real issue, which is ending hunger in our time. … Call 1-888-323-HOPE to make your contribution to The Food Bank of Western Massachusetts.”

For two days, he made similar pitches repeatedly while broadcasting live on the radio, pushing an empty grocery cart to symbolize hunger, and leading a group of 80-plus fellow marchers through the Pioneer Valley. The 2019 fundraising goal of $333,333.33 was his idea. He wanted to provide the equivalent of one million healthy meals for the western Massachusetts community, knowing that every dollar donated to The Food Bank provides three meals to someone in need. Belmonte’s on-air urging and interviews with marchers and greeters paid off. Monte’s March X surpassed his original goal of providing one million meals and is projected to provide many more.

“It shows how much western Mass. cares about making sure our neighbors have enough to eat,” he said. 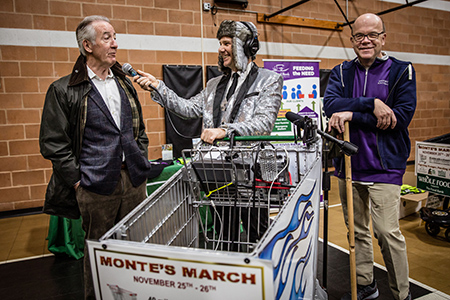 Day One of the March kicked off at the Martin Luther King, Jr. Family Services in Springfield at 6:30 a.m. with a rally that included pep talks for Marchers by Belmonte and Andrew Morehouse, Executive Director of The Food Bank. Congressman Jim McGovern — who has been participating in Monte’s March for the past seven years — and Congressman Richard Neal also offered words of support.

“This is real,” Congressman McGovern told the crowd, “This is not just talking the talk, we’re walking the walk. We’re going to raise enough for one million meals for people in the Pioneer Valley. To everyone who’s marching here, I want to say thank you.”

To end the rally, representatives from MGM in Springfield presented a $5,000 check to benefit Monte’s March and The Food Bank. The generous contribution will provide 15,000 healthy meals in the region.

From Springfield, marchers made their way to Northampton, stopping at destinations like Lorraine’s Soup Kitchen in Chicopee (a member agency of The Food Bank) and Gateway City Arts in Holyoke.  State Representative Aaron Vega and Holyoke Mayor Alex Morse greeted them.

Marchers began the second day of the march in front of Congressman Jim McGovern’s Northampton office. Trekking through chilly morning fog, and accompanied by Northampton Mayor David Narkewicz, they pressed on through Hadley, Amherst and farther north, stopping at various points along the way to greet school groups and community members who came out to cheer the marchers on and make donations.

Tim Austin, 6th grade teacher at the Fort River School in Amherst brought members of the school’s student council out to meet the group in Hadley. 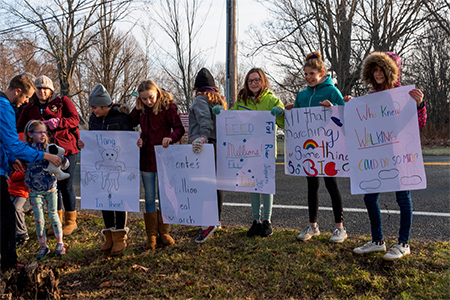 “[They] really wanted to show their support for Monte and the marchers because of what a dire and immediate problem food insecurity is,” Austin recalled. “One student told me that she has imagined herself being someone who doesn’t have enough food to get by, and that this makes her want to help those in need in the community.”

“I’m blown away by the generosity of people,” said marcher Kristen Eleckho, who has been participating in Monte’s March for a few years. “Walking is the easy part — bringing awareness to food insecurity is much bigger.”

Rest stops on Day Two included the First Congregational Church in Amherst where the group was greeted by church staff and Lucio Perez, who has been living in sanctuary at the church for the past two years. Marchers also visited Food Bank-member Amherst Survival Center, and Berkshire Brewing Company – a longtime donor through its Shabadoo beer percentage of sales — where lunch was provided by Bueno Y Sano. Congressman Joe Kennedy III met marchers at Berkshire Brewing, chatting with the group during their lunchtime break.

With the sky darkening and the final stretch of the March coming into view, Monte ramped up his on-air pitch to encourage more listeners to support The Food Bank. Musicians from Double Edge Theater in Ashfield joined in during the final mile and entertained a crowd of supporters while staff at The Food Bank tallied the end-of-the day results.

“I am so humbled by the community’s generosity over the last two days of Monte’s March. We are all so blessed that our community rallies behind the most vulnerable to prevent hunger and our ongoing march toward a western Massachusetts where no one goes hungry and everyone has access to healthy food every day,” Andrew Morehouse, Executive Director of The Food Bank said.

The Food Bank will accept donations for Monte’s March X until December 31, 2019. Photo albums for Day One and Two of the March can be found on our Facebook page.

*This is the final fundraising total updated after December 31, 2019.