Neither snow nor rain nor sleet nor gloom of night stays these marchers from the swift completion of their appointed goal. And although it was wet and cold for every step of the 43-mile march, it didn’t slow down WRSI – 93.9 The River’s Monte Belmonte or the dozens of community supporters, political representatives, and business leaders that accompanied him on this year’s Monte’s March to end hunger.

On November 19 & 20, Monte pushed a shopping cart from Springfield to Greenfield to raise vital funds for The Food Bank of Western Massachusetts. While broadcasting live during his march, Monte encouraged his listeners to call with their donations or to donate online. 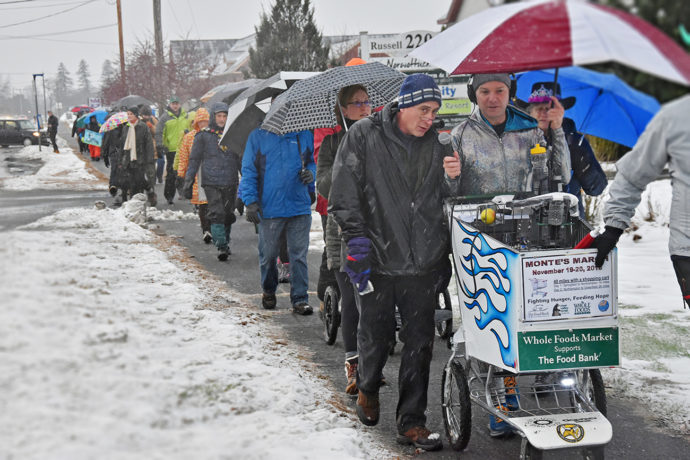 By the time the group reached Bank Row in Greenfield, Monte’s March raised more than $271,000 to support The Food Bank’s mission. However, donations continued to be accepted for the March through November 30, bringing the final total to $294,720.

“The support we see from everyone, in every town, over the two days of Monte’s March is absolutely amazing,” explains Andrew Morehouse, Executive Director of The Food Bank, who also joined Belmonte for all 43 miles of The March. “It is truly inspiring to see everyone come together to strengthen our community.”

Since 2010, the annual event has raised a total of $1,177,720 for The Food Bank, making it one of the most successful fundraising events in western Massachusetts. Every dollar raised during the event allows The Food Bank to provide 3 meals.

“It’s incredible to see the work we do in the community, in the grassroots, to ensure tomorrow folks are going to have enough food,” Monte told The Daily Hampshire Gazette.