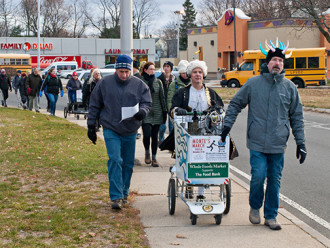 Monte Belmonte (center) pushes his shopping cart through the streets of Springfield during the first day of Monte’s March.

For the seventh consecutive year, WRSI–The River’s Monte Belmonte led a group of community supporters, political representatives, and business leaders through the streets of the Pioneer Valley, to raise money and awareness for hunger in our community. Leaving from Friends of the Homeless in Springfield on Monday morning of day 1, and ending at Seymour The Pub on Bank Row in Greenfield on Tuesday evening of day 2, Monte broadcast live for all 43 miles of the walk, encouraging listeners to call in with their donations to benefit The Food Bank of Western Massachusetts.

View photos from both days of Monte's March

When Monte and his entourage finally reached Greenfield, a running total of $183,299 was announced. But donations continued to trickle in from passers-by, listeners, community partners and local businesses. When all the donations were finally counted, Monte’s March raised over $211,000 to support The Food Bank’s efforts to feed the more than 200,000 people  in our four county region struggling with hunger.

“I felt like I had the wind knocked out of me for the last two weeks when I heard about the election,” Belmonte announced to the large crowd that had gathered at the end of the march. “But I feel like I got my wind back, with all of you folks reminding me of what kind of community we live in.”

“I think we all learned something over the course of these two days,” explained Andrew Morehouse, Executive Director of The Food Bank. “This march is about a lot more than just raising money for the 200,000 people who experience hunger day-in and day-out over the course of the year. It’s about giving them hope; it’s about the story that compassion lives strong in the valley and fairness is an important value of our society; and that everyone has the right to healthy food.”

Walking every mile of Monte’s March for the fourth straight year was one of the countries’ strongest hunger advocates in Washington, Congressman Jim McGovern. Since 2013, his anti-hunger campaign, #EndHungerNow, has led the way in our nation’s struggle to eliminate food insecurity.

Now in its seventh year, Monte’s March has raised nearly $600,000 for The Food Bank, providing approximately 1,800,000 meals to our neighbors in need facing food insecurity.