In this Op-Ed, Monte Belmonte, founder and leader of Monte’s March, the two-day, 43-mile walk to benefit The Food Bank, looks back on the March’s history, while encouraging the western Mass. community to eradicate hunger in the future. Monte Belmonte is a radio personality for WRSI – 93.9 the River in Northampton. 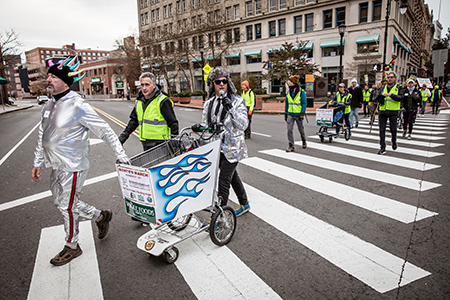 Monte’s March started as a crazy idea to both raise awareness about the issues of food insecurity in our area and as a way to focus on the more effective work the Food Bank can do with funds rather than the more traditional food drive (taking every dollar donated and turning it into three meals). A group of people at the Food Bank and I brainstormed about what might draw people’s attention to the issue.

At first, we thought, “what if we took a shopping cart around Northampton and asked local people and businesses to donate money?” And then I thought, “what if I took a shopping cart and pushed it all the way from Northampton to Greenfield?” That was the lightbulb moment. The empty shopping cart became a symbol of hunger. And the long–distance walk was just strange enough for people to take note. We spend the day broadcasting live from the cart and talking about the issues surrounding food insecurity and asked listeners to call in and donate. 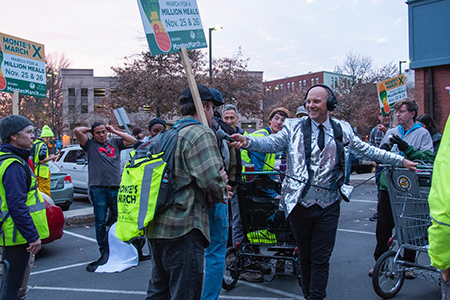 That first year, the goal was to raise $5,000 and we ended up raising $13,000. To see how far the fundraising totals have grown over the ten times doing the March is truly remarkable and is a testament to the generosity of our community. It shows how much western Mass. cares about making sure our neighbors have enough to eat. With the Food Bank’s ability to turn every dollar donated into 3 meals, and knowing how much we raised last year, I thought it would be incredible and achievable to raise enough money for one million meals. More meals than the Food Bank distributed in all of Franklin County last year. With a large group of dedicated marchers who started their own fundraising teams, with some very generous matching donations from businesses and individuals, and with people calling in, donating online and stopping us to hand us money while on the March, we met and exceeded that million meal goal.

The Valley’s generosity is overwhelming. And yet, providing our million plus meals is just a large drop in a large bucket in alleviating hunger. The ultimate goal of the March is to open people’s hearts and minds to the idea that we could, as a region and as a nation, end hunger. We have the means but, as Congressman McGovern frequently questions, “do we have the political will?”

I hope by raising more awareness about the issues of food insecurity we will muster that political will someday soon.