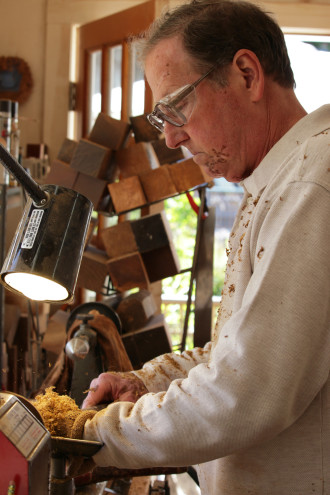 Eric Reeves in his backyard studio

Retired Smith College professor and woodturner, Eric Reeves, has a small, backyard studio that could aptly be described as being both highly organized and somewhat cluttered. A large pile of sawdust has been swept to the far end of the studio, and tools are systematically scattered everywhere. Rough wooden blocks of differing sizes, shapes and varieties are categorized in bins, and a few uncut stumps sit on the floor. The lathe he uses to turn these rough pieces of wood into finely crafted works of art is anchored to a work bench beneath a bank of windows. Today, he is giving a woodturning demonstration using a chunk of bocote, Mexican rosewood. Within minutes, he transforms the block into two, small and delicately curved vessels that he will later refine. Although he makes the process look easy, the work requires tremendous concentration and precision.

Reeves became attracted to the art of woodturning when he was a teenager during the 1960s. Self-taught, he started out emulating other artists before defining a unique style that reflects the classical sculpture, pottery and architectural forms that he admires. 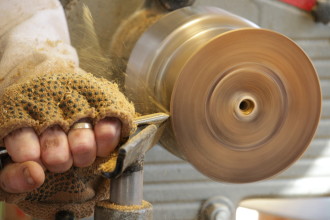 Perhaps the most admirable aspect of his craft is the fact that he has never made a profit from his artwork. Instead, he donates 100 percent of his sales to a few charities with missions that he deeply cares about. One of those charities is The Food Bank.

“It’s the backbone of human services in Western Mass,” Reeves emphasizes. “From the beginning, I decided I wouldn’t make a profit from woodturning. It’s not only a craft but a moral endeavor.”

Reeves adds that he’s always surprised by the depth of food insecurity in the region. “Over 200,000 people—the figures for hunger are really staggering.” To help alleviate the problem, he reached out to Don Muller Gallery to create a month-long campaign to benefit The Food Bank.

“[I’m] excited to be a part of this charitable opportunity with Eric Reeves,” said Maya MacLachlan, owner of Don Muller Gallery. “Teaming up with a local artist to help a local cause is a wonderful way to show my support for the community.”

Reeves has had a long relationship with the gallery and sold his first piece of art there back in the 1980s. That relationship, along with his woodturning work, nearly came to an abrupt end when he was diagnosed with leukemia several years ago. But after a stem cell transplant that pushed his illness into remission and a six-year hiatus, Reeves resumed his work and is quite busy. He’s selling pieces in galleries around the country; and, as a well-respected researcher of the conflict and affairs of greater Sudan, he serves as a pro bono, expert witness in asylum cases in the U.S. and United Kingdom. Much of his work takes on a global perspective, but he’s committed to solving hunger in Western Massachusetts. “If you don’t support places like The Food Bank, you’re going see people struggling in a way that you don’t want to see them struggle.” 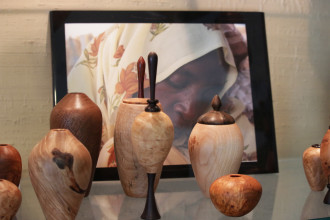 Reeves encourages the public to buy his work directly from Don Muller Gallery this month. “Take a piece out and feel it,” he says. “The wood has a warmth of feel as well as an inherent beauty. You can’t be going wrong if all the money you give is going to The Food Bank; and I hope you feel that [your purchase] has some inherent value.”