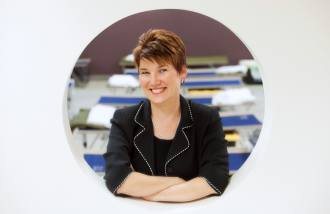 The Food Bank is pleased to announce the appointment of Kathy Tobin as the new Director of Development and Marketing. In this role, she will oversee all fundraising and marketing activities for The Food Bank, including special events, individual donor cultivation, communications, corporate relations, grants, and education outreach. She began her position on August 31, 2015.

“We are very excited to have Kathy joining our organization,” explains The Food Bank’s Executive Director, Andrew Morehouse. “She brings with her a breadth of knowledge and experience from her current role at the Friends of the Homeless in Springfield — a member agency that receives food from us — as well as her career in media. We are confident that her proven track record for leadership and creativity will be a tremendous asset in forwarding the mission of The Food Bank.”

Since 2009, Tobin has served as the Director of Program Development for The Friends of the Homeless where she increased visibility for the non-profit and helped more community partners learn about the critical role they play in meeting the needs of homeless in the region. Under her direction, they established a formalized annual appeal, expanded corporate outreach, coordinated volunteer engagement, and held an annual donor event. In addition, she oversaw the establishment of the Friends of the Homeless Store, providing people with access to free personal care items and clothing.

“Her talents will certainly be missed,” says Bill Miller, Executive Director of Friends of the Homeless. “I know I speak for our Board, our staff, and our clients in acknowledging her efforts to initiate and sustain a development program for the organization. We will build upon the foundation Kathy helped us establish as we expand the support required to meet the needs of our homeless population.”

Prior to joining Friends of the Homeless, Tobin enjoyed a 30-year career as a television news journalist with WGGB-ABC40 in Springfield, where she was honored with a number of awards for news coverage including the prestigious Edward R. Murrow Award. Among the many issues she covered during her television career were the plight of area homeless, and the community campaign and planning, which led to the development and construction of the Friends of the Homeless Resource Center on the organization’s Worthington Street campus.

Tobin is also involved with a number of community organizations. She serves as a Trustee for Elms College in Chicopee, a Director of Spirit of Springfield, a Director of the Women’s Commission in Springfield, and sits on the Scholarship Committee for the Valley Press Club.