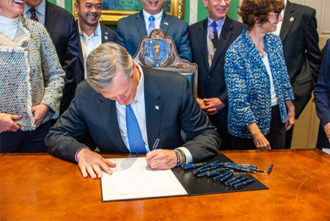 The Food Bank would like to thank Massachusetts governor Charlie Baker for approving state spending on three major hunger-relief programs in the Fiscal Year 2020 budget. In late July, Baker signed off on the $43.3 billion budget passed by the state legislature without a single veto, giving the green light to spending increases for programs that provide healthy food to low-income MA households.

Hunger-relief programs included in the FY20 budget are MEFAP (the Massachusetts Emergency Food Assistance Program), HIP (The Healthy Incentives Program), and the Close the SNAP Gap Pilot Program. Spending for MEFAP — which provides emergency food to all four food banks in the state — was approved at $20 million, an increase of $2 million over last year’s budget. For FY19, The Food Bank has so far received 2,534,060 pounds of food through MEFAP (the equivalent of 2,111,716 healthy meals), and the expected increase in food will provide households facing food insecurity in our region with greater access to healthy meals.

HIP also received a necessary funding increase over last year’s budget. This program, which matches SNAP benefits 100% when recipients use them at farmers markets, CSAs, and more, has an approved spending budget of $6.5 million. Last year, HIP’s $4 million budget could not cover the program’s expenses due to its unexpected popularity with SNAP recipients, and it was forced into a temporary hiatus.

Finally, the FY20 budget includes $1 million to fund a new Close the SNAP Gap Pilot Program. The SNAP Gap refers to the more than 700,000 MassHealth recipients who are likely eligible to receive SNAP benefits but are unaware that they may qualify for the program. The pilot will test the viability of creating a common application for both programs.

“We are very pleased with the outcome of this year’s budget negotiations,” Maxwell said. “The hard work put in by the legislature and the governor will help many people in western Massachusetts—and across the Commonwealth—access the food they need to be healthy and productive. At a time when nutrition support from the federal government is increasingly coming under attack, it is so important for Massachusetts to do all it can to provide a strong safety net for those who need it.”