Getting into Gear for Will Bike 4 Food: Shifting to Success

By Sean Condon of Speed & Sprocket 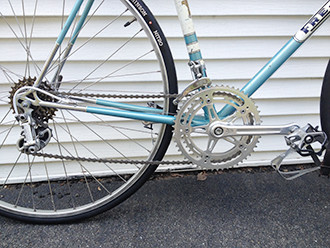 September has arrived, which means there are only a few more weeks until Will Bike 4 Food. Hopefully, after reading our last column, you’ve planned a training schedule to ensure you arrive with no worries on the big day!

One aspect of your bike that you might still be struggling with, however, is those dang gears. While it might be true that today’s bicycle technology makes riding easier, you still need to understand proper technique in order to take advantage of these modern upgrades.

It’s important to understand that the lower the number on your shifter (if it has numbers on it), the easier it is to pedal (think slow speeds and going up hills). The higher numbers mean it’s harder to pedal (think high speeds and going down hills). Always be pedaling when you shift and try to anticipate what gear you want to be in before you stop. That means when you’re approaching a big incline, shift into an easier gear before you start going uphill and begin to struggle.

Most likely you have two shifters — one on the left and one on the right. The one on the left controls your front derailleur, which moves the chain up front on the chainrings near your pedals. If you have three gears there, for most riding you’ll be in the middle ring and focus on shifting on the right side. If you have two gears (most likely on a road bike) you’ll probably be on the smaller of the two. Keep in mind that changing gears in the front has a very large effect on your pedaling, and that you probably won’t be shifting there very often unless you are on roads that are constantly going up and down in elevation.

The shifter on the right side controls your rear derailleur, which moves the chain on the gears in the back on the wheel. This will be where you do most of your shifting. While shifting in the front produces very dramatic changes, shifting in the back is fine-tuning and produces much smaller changes. If you are on terrain that is often changing, whether going up or down, you’ll find yourself shifting the right side fairly regularly. The goal is to keep your cadence, or how fast you’re turning the pedals full rotations, at a fairly constant speed. While cadence is a personal preference, it’s better to have it a little faster rather than slower. As you put on more miles, you’ll develop your own rhythm.

When you are about to shift, ease off on your pedaling power to make your drivetrain’s (the chain and gears) job easier. If you try to keep pedaling full power you might notice that it makes a grinding noise and not much else. Ease off and you might find that it will shift for you. If not, give us a call for a tune-up or bring it to your local shop for some adjustments.