Dedicated volunteer makes a difference with a smile 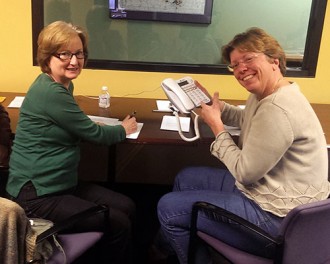 Diana Spurgin spends most Tuesday mornings laughing and smiling with her friends. They aren’t sitting idle while they chat, however. They are helping make sure that the more than 235,000 people in Western Massachusetts who rely on the emergency food network have enough to eat. She and her friends work the morning warehouse volunteer shift at The Food Bank of Western Massachusetts, and they are integral to our operation. This April, we recognize our passionate volunteers and the important work that they do as part of our celebration of National Volunteer Month.

“It’s the type of place volunteers stay,” says Diana noting the many long-time regulars. “It’s such a great bonding experience. You’re standing next to someone from Hatfield and someone from Shelburne Falls, and you all know you’re doing something great together.”

“When I learned the surprisingly high number of children who can only rely on school lunches that was a real eye-opener for me,” says Diana. “A lot of people are opening empty refrigerators. No one should be hungry.”

Diana and her fellow volunteers sort food donations, taking care to make sure they are organized and packaged correctly for distribution. This is integral to making sure that all food distributed is fresh and ready to be delivered to those who need it most. She never finds her time to be boring, due to the friendly company.

“It’s a great group of people. I don’t feel like I’m working,” says Diana. “If anything, it’s good exercise. I always tell people that volunteering at The Food Bank is my exercise. We are lifting banana boxes full of canned goods!”

In addition to her usual Tuesday shift, Diana has also volunteered at a number of Food Bank events, including Will Bike 4 Food and our monthly Family Volunteer Day. She has even answered telephones during Monte’s March for the past three years.

“I love hearing the voices of people calling in who have like-minded goals and support the great work that Monte does,” says Diana who offered a matching donation for Amherst residents while volunteering this past year when her phone didn’t ring for a little longer than she would like.

Diana is involved in the community outside of The Food Bank as well. In additional to volunteering at Amherst Survival Center, she is the Vice President of the board for the Amherst Education Foundation, an independent, non-profit organization which supports Amherst area public schools in providing a challenging and enriching educational experience, and serves on the vestry at Grace Episcopal Church.

Recently, one of her passion projects snowballed into a much bigger fundraiser. When Diana became aware of how many families could not afford diapers during Diaper Need Awareness Week, she decided to do something about it by taking-up a collection at her church. Within one week, approximately 1,870 diapers were collected. When Amherst Survival Center’s Executive Director Mindy Domb learned of this early success, the two began to strategize expanding the effort.

They organized diaper drop-off sites throughout Amherst with help from Center for Human Development’s Family Outreach of Amherst, United Way of Pioneer Valley, the Amherst College Center for Community Engagement, State Representative Ellen Story, the district office representative for WIC, and other concerned individuals in the community.

Involved citizens such as Diana and her fellow volunteers help keep our community strong. They truly make a difference in the lives of our neighbors who are struggling to both pay their bills and put food on the table, and they do so with a smile.

“Without volunteers The Food Bank couldn’t do what it’s doing. Everyone should volunteer at The Food Bank,” says Diana before hesitating for a moment. “Just don’t come in on Tuesday and take my spot!” she says with a laugh.