Cyclists raise $130,000 to fight hunger in Western Mass. through Will Bike 4 Food 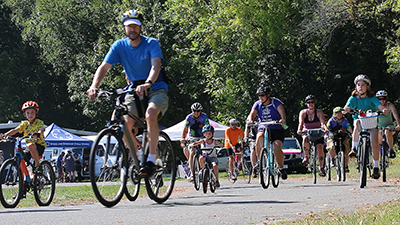 On Sunday, September 24, The Food Bank held the 7th annual Will Bike 4 Food charity cycling event, presented by Stop & Shop, at The Lion’s Club Pavilion in Hatfield. More than 325 cyclists of all ages and experience levels braved the unseasonable 90-degree heat to participate in the event and raised more than $130,000 to benefit 223,000 food insecure individuals in Western Massachusetts.

“It’s very exciting to see all the riders, volunteers and sponsors come together to support our community,” explained Andrew Morehouse, executive director of The Food Bank. “It’s a sobering thought that 1 out of every 4 people in western Massachusetts relies on emergency food assistance to put food on their tables. But thanks to everyone’s efforts today, we can continue to distribute healthy food to children, seniors and hard-working families in our region who don’t know where their next meal is coming from.” 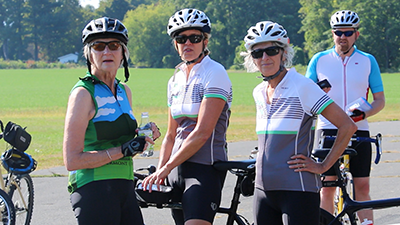 For the event, cyclists chose to ride one of four routes — 10, 25, 50, or 100 miles — through the Pioneer Valley to help raise funds and awareness for food insecurity in our region. Additionally, local businesses and organizations formed teams and raised funds. The top three fundraising teams were Tighe & Bond, Stop & Shop, and River Valley Co-Op.

Many cyclists said that participating in Will Bike 4 Food was important and personally rewarding. “Food insecurity is a big issue in the western part of Massachusetts, and I think The Food Bank does a great job making sure that everyone is helped who is having some hard times,” said 50-mile rider Robert Leavitt. “So, I’m glad to do this and glad to collect donations, and it’s been a great cause.”

Since Will Bike 4 Food began in 2011, the event has raised over $544,000, providing the equivalent of more than 1.6 million meals to our neighbors in need throughout Western Massachusetts. 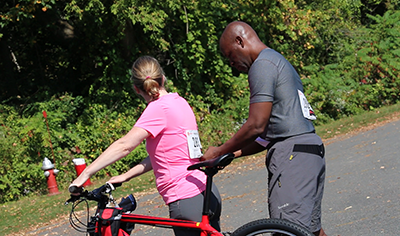 All proceeds from the charity event will benefit The Food Bank, and will help us increase the amount of healthy food we distribute to more than 200 partner agencies, including food pantries, emergency meal sites, and shelters. It will also help support our direct-to-client feeding programs, such as Brown Bag: Food for Elders (serving thousands of area seniors) and the Mobile Food Bank program (bringing fresh, perishable food directly to under-served communities).

As the need for emergency food in Western Massachusetts continues to increase, more than 223,000 people in cities and towns across Berkshire, Franklin, Hampden and Hampshire Counties who turn to food pantries and meal service programs to feed themselves and their families each year. Last year, The Food Bank distributed more than 10 million pounds of food through the region’s emergency food network.