This year, on November 29th, Feeding America visited the Thanksgiving Angels distribution in Pittsfield to share the stories of some of the thousands of Berkshire residents served by participating pantries, many of which are Food Bank partners, that make the event possible.

Thanksgiving Angels — a collaboration of 21 food pantries in Western Massachusetts — provides more than 1,700 families with the opportunity to celebrate a traditional Thanksgiving meal in their own homes each year. Thanks to their efforts, nearly 6,500 men, women, and children received turkeys and the fixings to celebrate a traditional Thanksgiving meal in their homes. About 500 volunteers shared their time in the days leading up to Thanksgiving to pull off this feat. Close to 650 meals were delivered over the weekend, and the rest went out during a drive-through distribution on Monday and Tuesday, just in time to get those turkeys thawed and cooked.

Natasha Kegresse wanted to make Thanksgiving special, especially since her daughter Braeleigh would turn two the day after the holiday. After visiting the Thanksgiving Angels holiday distribution, she was excited to make traditional holiday dishes – like pudding pie and Jubilee Rolls – for her daughter. She also planned to bake turkey and casserole for her “chosen family,” a group of her friends and their children. Natasha is a medical assistant but is unable to work as she raises her 2-year-old daughter Braeleigh on her own. “Just being just us, sometimes it’s too much,” she said. “We have our own little family now.” 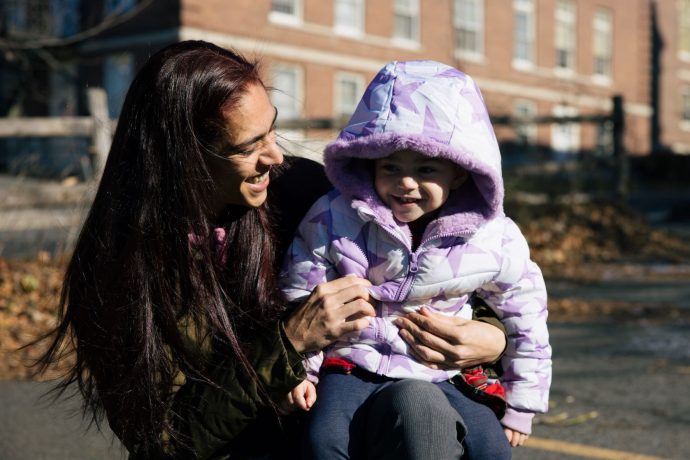 Natasha Kegresse and her daughter Braeleigh. Photo by Feeding America.

Robert Wincek loves to cook. Prior to his 30-year career as a commercial and home real estate contractor, he attained his culinary certificate and worked in restaurants in the Pittsfield, Massachusetts area. But everything changed when Robert had a heart attack four years ago. He could no longer work, and it became more difficult to afford quality ingredients for the meals he cooked at home. For groceries, he relies on funds from the Supplemental Nutrition Assistance Program. “It’s a real change of life,” he said. With inflation, he knew he wouldn’t be able to buy the necessary ingredients for a traditional Thanksgiving meal. When he goes to the grocery store, he finds that “typically, what was a $25 venture is now double that.” Robert spoke as he and his dog Kuki waited for the start of the 11th annual Thanksgiving Angels. 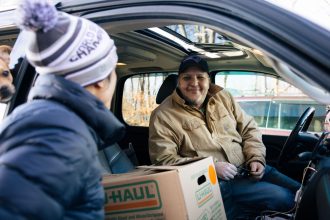 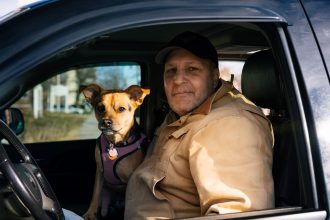 Robert and his dog Kuki. Photo by Feeding America.

Robert was thrilled to be able to work with quality ingredients again. Otherwise, “I would probably go to the deli and get some thick sliced turkey, throw some instant potatoes on it with some gravy, and that would be it,” he said. “I wouldn’t have the ability have real roasted turkey.”

While he awaits his new heart, Robert makes sure to give back to his community through advocacy work, including by ministering to people who are homeless and by helping make sure that the city is compliant with mandates of the Americans with Disabilities Act. 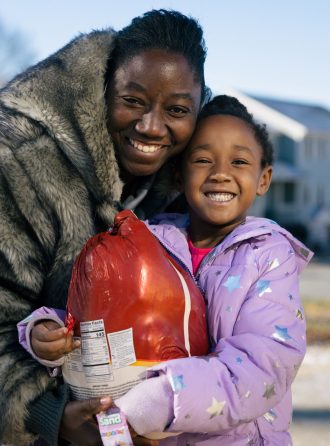 Tinamarie Smith and her Daughter Genevieve. Photo by Feeding America.

Tinamarie Smith was brought up to provide for her community, especially by making sure her family and neighbors have access to good food. She remembers that her grandmother Louise “would always cook a big meal. She would make enough so if anybody from the neighborhood came, they could just sit down and have a hot meal,” Tinamarie said.

Her grandmother’s legacy inspired her, Tinamarie said. “To be a blessing to other people is amazing. That’s what I’m all about: being able to serve.” In addition to her work as a care provider for brain injury patients, she volunteers her time every Saturday at her church where she helps distribute more than 400 meals to the community.

She brought her daughter Genevieve, 4, to the 11th annual Thanksgiving Angels. With a climbing cost of living, the distribution would help Tinamarie and Genevieve celebrate the holidays as their family has for generations. “Growing up, we always did big meals,” Tinamarie said. The holidays are “a time to get together with family and friends and be able to converse and eat and have fun.” 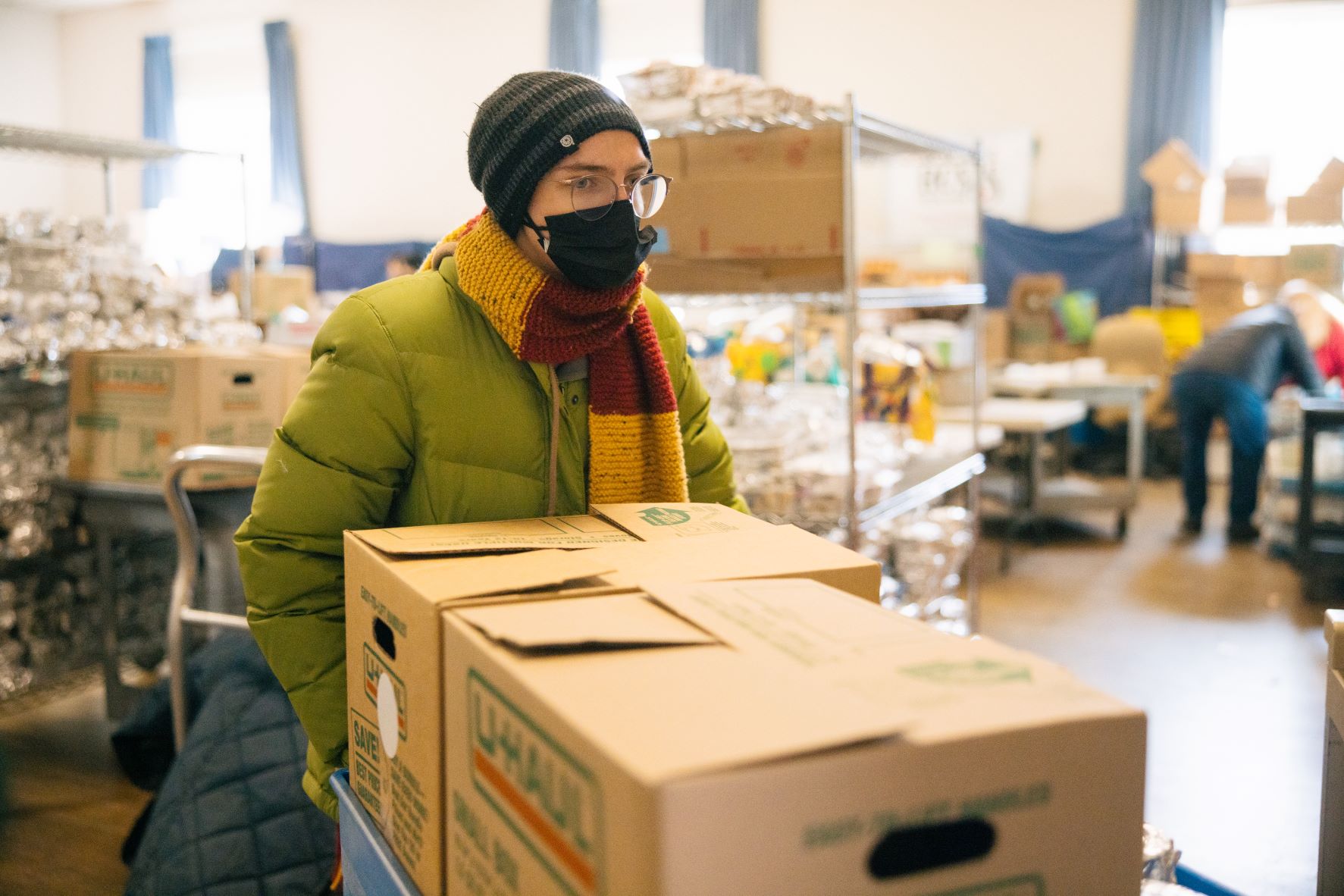 Scout Swonger, one of 500 volunteers at Thanksgiving Angels. Photo by Feeding America.

“Not everyone has time to volunteer,” Scout Swonger said. “What is two hours of my week and life if it makes a huge difference to someone else?” Scout, who uses they/them pronouns, moved to the Pittsfield area last year for a sales and fundraising job at a local theater in the famed Massachusetts Berkshires. They were surprised by the community’s economic disparities. “You turn a corner, and it’s million-dollar houses. And then the next corner is very much the opposite,” they said.

Scout also noticed that people without a car struggled to access fresh fruits and vegetables, so they started volunteering as a food delivery driver for the South Community Food Pantry, a partner agency of the Food Bank of Western Massachusetts. “I have a car. I have the time,” they said. The effort has helped Scout feel at home in Pittsfield. “I feel more connected to the region. I also feel really connected to these 8 to 10 households that I deliver to every single week. These are some of the people I see most frequently in my life.”

After their delivery route, Scout was headed home to New Hampshire to spend Thanksgiving with their family. Volunteering had changed their perspective, they said, and it had given them more to be thankful for. “Week to week, it’s made me more aware and more grateful of even the most basic things we have.”