Encouraged by public pressure following the 1968 release of the CBS documentary “Hunger in America,” the 1969 conference made major improvements to social programs aimed at eliminating hunger such as SNAP (formerly called Food Stamps), created the Special Supplemental Nutrition Program for Women, Infants, and Children (WIC), and laid the groundwork for today’s school lunch programs.

The 2022 conference comes after another illuminating moment in American history, as the effects of the pandemic continue to change the landscape of food access. Covid-19 brought to light to the general public a sobering reality that those living with food insecurity already knew; the United States has a hunger problem, and the average American is only a few incidents of circumstance away from facing hunger themselves.

The White House has set an ambitious goal to end hunger in the United States by 2030. To do so, they have released their National Strategy for bringing together the private, public, and nonprofit sectors to work towards a future where every American has access to healthy food. 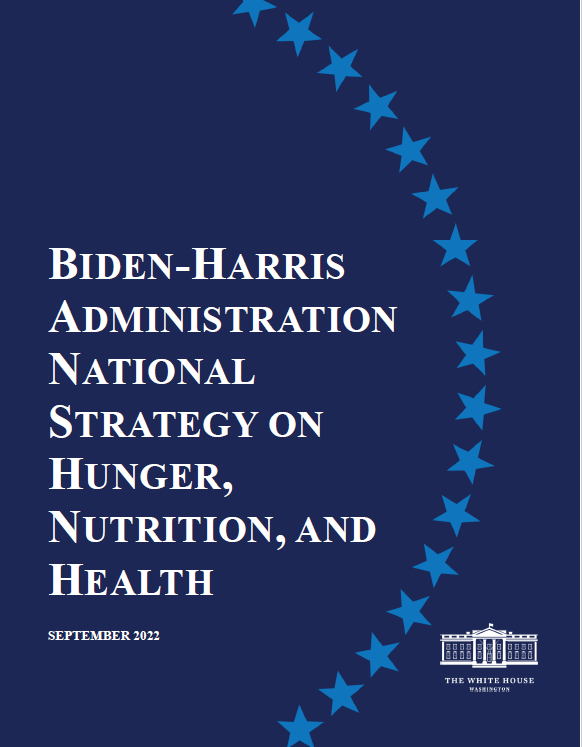 The National Strategy released by the White House this fall

Shortly after the conference, The Food Bank of Western Massachusetts and Focus Springfield hosted a roundtable discussion with a panel of experts to share their thoughts on what transpired in DC, as well as how these national goals apply locally. The discussion was moderated by Aaron Vega, Director of the Office of Planning & Economic Development for the City of Holyoke.

Liz O’Gilvie, Director of the Springfield Food Policy Council and member of the MA Food System Collaborative, spoke about the ties between nutrition, health, and the legacy of systemic racism in Hampden County.

“The pandemic did increase hunger… but the pandemic also taught us something that I have been saying for 15 years that unhealthy food is killing us, and disproportionally it’s killing people of color – Black and Latinx people.”

One point emphasized by Monte Belmonte, local radio host and personality at the front of the upcoming Monte’s March, was on the importance of the stories and wisdom of people with lived experience of food insecurity- something he was glad to see featured on the national level as it is a through-line in his own hunger advocacy work. In particular, he notes that it is all too common for people living north of the Holyoke mountain range to be detached from Hampden county. To help combat this, he changed the starting point of his long running Monte’s March for The Food Bank to Mason Square in Springfield, allowing him to air the stories of residents in those communities to his listeners in other counties.

Dr. Christina Royal, President of Holyoke Community College, shared examples from her work with students as to how a lack of basic needs can become a barrier for advancement in all areas of a person’s life.

“I talk a lot about how it’s difficult to educate a hungry student… If we’re not focused on helping to provide access to food- access to healthy food- and focusing on the health and wellness and vitality of an individual, that has to be addressed before addressing all of the other challenges that we experience.”

Christina Maxwell, Director of Programs for the Food Bank of Massachusetts, spoke about the efforts in by the Food Bank’s advocacy team and its many partners to help address to root causes of food insecurity at the state level, particularly around Universal Free School meals, the College Hunger bill, and a bill to provide funding to mitigate the “cliff effect” the last of which has recently been passed by the Massachusetts legislature.

Koby Gardner-Levine, Regional Manager of the Office of Congressman Jim McGovern, was able to speak more to the federal strategy, making note of the governments upcoming options for taking the ideas discussed in the strategy document and making them a reality.

“In addition to the white house document that we have all been talking about, there is the opportunity to include a number of these issues as legislation in the upcoming Farm Bill.”